How can CBD help with mental health conditions? For long term suffers of depression, anxiety, sleep disorders and seizures is there hope for them that CBD will help them alleviate their conditions and symptoms, research is ongoing but there is some evidence to say it does and this is how it work.

Cannabidiol (CBD) is a naturally occurring compound found in the resinous flower of cannabis, a plant with a rich history as a medicine going back thousands of years. If you’re new to cannabis, you may be wondering about the meaning of CBD. CBD stands for cannabidiol.It is a non-intoxicating cannabinoid found in cannabis. Cannabidiol is the second-most abundant cannabinoid in the plant after tetrahydrocannabinol (THC). It has many potential therapeutic benefits, including anti-inflammatory, analgesic, anti-anxiety, and seizure-suppressant properties. CBD can be sourced from both marijuana and hemp plants.

How does CBD work? 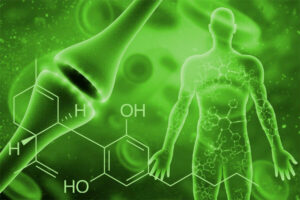 CBD works alongside the Endocannibinoid system, this system is found in all types of mammals.

The ECS itself is made up of three parts:

When something is operating outside of the right range, your body activates the ECS to help correct it.

CB2 which is in the peripheral nervous system (nerves in your extremities), the digestive system, and specialized cells in the immune system

Cannabinoid receptors are believed to be among the most plentiful in our central nervous system, and some researchers hypothesize that we could have a third, undiscovered one, as well.

Through those receptors, the ECS helps regulate a lot of important functions, such as:

Your body activates the ECS with precision so that it impacts only what it needs to.

Can CBD help with Mental health?

CBD has been known to aid in a range of mental health issues:

Depression/Anxiety – CBD oil shows promise in helping anxiety and depression, two of the most common mental health disorders. Millions of  adults find their quality of life hindered by these conditions.  Studies suggest that CBD may help alleviate symptoms of depression by interacting with serotonin receptors in the brain. Serotonin is a neurotransmitter that plays a role in a range of functions in the body including the regulation of mood. It may help contribute to feelings of happiness and well-being.

Insomnia – Because CBD may have a calming effect, it may also hold promise in treating sleeping difficulties. Sleep is a critical component of mental health and well-being.  One study conducted with adults who had symptoms of anxiety and poor sleep found that 65% experienced improvements in sleep quality scores after a month of taking an average of 25mg of CBD daily, although those scores fluctuated over time.

PTSD – Increasingly, recent research suggests CBD may be another way to treat PTSD and other anxiety disorders. In particular, CBD appears to have a positive effect on several of the core symptoms of PTSD.  When cannabidiol (CBD) gets introduced into the body—through inhalation, oral ingestion, or transdermally (through the skin)—it activates CB1 and CB2, two cannabinoid receptors in the endocannabinoid system. This has ripple effects throughout the central nervous system, such as increasing pleasure and altering memory processing. Meanwhile, the cannabinoids block the retrieval of the traumatic memory.  Over time, eCB enhancers like CBD work together to block the continuous retrieval of the memory, enabling the memory to lessen in intensity and detail, while also reducing the anxiety associated with it.

While CBD holds promise, a recent comprehensive review of the research suggests that support for the mental health uses of CBD remains insufficient and there is still ongoing research into how it can help to aid people who chose to use it for themselves and their health and well being including mental health.

Despite claims about CBD’s purported mental health benefits, it is important to understand that the research on its use is still limited. There have been studies done, but many of these have limitations and further research is needed in order to fully understand CBD’s therapeutic potential.